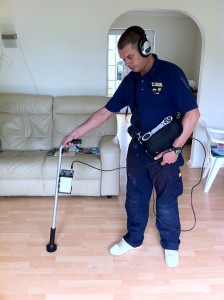 When it comes to detecting leaks in your system, time really is of the essence; sourcing and repairing a leak quickly can minimise the potential damage to your home, as well as saving you money on water bills – if a leak goes undetected for an extended period, you could end up with a hefty utility bill through no fault of your own. Here at ADI Leak Detection, we have access to the very best equipment, techniques and highly trained Leak Detection Engineers, allowing us to locate the source of your leak and deal with it as quickly as possible.

This includes the use of Nitrogen Hydrogen tracer gas – this can be an extremely effective and speedy solution and, despite the ominous name, completely safe. Tracer gases are often used one we have narrowed the location of the leak down to a pipe run or a single room / area after Thermal imaging has been used to begin the leak detection process.

What Is Nitrogen Hydrogen Tracer Gas?

As the name suggests, nitrogen hydrogen tracer gas is a leak detection solution comprised of these two elements. The tracer gas allows leaks in systems and pipeworks to be detected very quickly, saving valuable time and money. The mix itself is a blend of 95% nitrogen and 5% hydrogen particles; the hydrogen particles are the key.

As the lightest, least hazardous gas, hydrogen can spread throughout the area under examination – the test part – and seep quickly through even small leaks, with no risk to engineers. The combination of nitrogen and hydrogen allows the test part to remain dry, and also remains totally unaffected by any changes in elasticity or temperature changes, making it suitable for use in a wide range of situations and scenarios. Hydrogen also has the added advantage of dissipating very quickly – this means that any background interference is kept to an absolute minimum, allowing the task at hand to be completed in no time  – our engineers will be able to get the job done with minimal fuss.

Using a blend of nitrogen and hydrogen helps to keep everyone involved safe, largely due to the nature of the hydrogen; one of the least harmful gases. It also has a number of features which make it safer than helium; it is non-toxic, non-corrosive and non-flammable, making it suitable for use in a wide range of settings.

Are There Any Alternatives For Leak Detection?

In some cases, helium was once commonly used as a tracer gas in the process of leak detection, and remains popular in a number of industrial settings. The gas has a number of disadvantages however; it dissipates far more slowly than helium, and is far slower to diffuse once inside the test parts. It is also more expensive, making it less appealing for many engineers.

Hydrogen also has a number of safety features when compared to hydrogen; the former is non toxic, non flammable and non corrosive, making it safer for the engineers involved. As well as being safer, hydrogen has the added bonus of reduced viscosity, and is far less expensive to purchase and maintain, making it a popular option for many contractors. As an added bonus, it is a renewable resource, meaning it is also a great option for the planet!

Here at ADI we are always ready to take your call, simply call on 0800 731 3843 and your call will be greeted by one of friendly team who are here to help you with finding your water leak.