My job of the week is one I can’t believe we found the leak on myself, even after being in the Leak Detection industry for over 10 years and 20 years of plumbing experience. So forgive me for rambling on. But I would like to share it with you in this blog.

We were approached by a company that looks after The Langley Park Hotel, Uxbridge Road, Slough. Well, I don’t expect you to know the hotel, but OMG it is beautiful. Anyway, they had a leak on their swimming pool, which we were asked to find. No problem – that’s what we do! 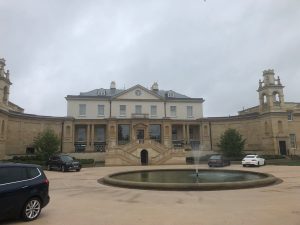 The history of the pool is quite short. In fact it had been built, completely new installation, we understand six months old. The pool was new and all the pipework had supposedly been pressure tested and the pool inspected on installation. 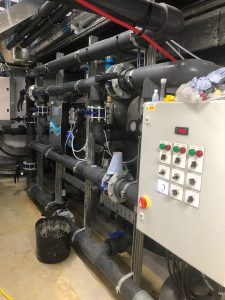 Nonetheless, after a few weeks, it became apparent that the pool was leaking water at a very fast rate!

Although the pool was new, there were no plans to help us with the location of the pipework. OK on a domestic pool, it’s normally pretty obvious where the filtration pipework runs are located.

On a commercial pool the pipework could be going anywhere because of the distance between the pool and the filtration room and believe me finding a leak on multiple five inch diameter pipe that may run a few hundred yards is not easy!!

Well that’s where we come into the process. Being the only SPATA registered swimming pool Leak Detection engineers in the UK, we were more than happy to help.

Our processes started on the swimming pool filtration system pipework, and was carried out by our expert pool engineers / PADI qualified divers, on all the associated pipework with the pool full of water

Now fortunately the pool company had done previous tests and had a good idea which run was leaking, so at their request we focused on the skimmers, all four or them!! Pressure testing was carried out on the skimmers that confirmed a major leak and so too the magic of tracing the leak location!! 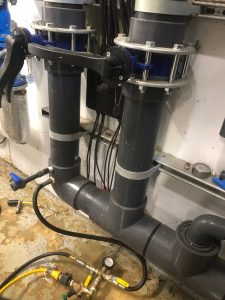 All the other pipework was tested for flow and the pool structure was examined. No other leaks identified. We sealed off the skimmers to test and noticed that the pool stopped filling. Obviously this took a little time, but helped us prove that there were no other leaks on the pool or pipework

One fact we found out was the pipe run for the filtration pipework was not in the location we expected, in fact the pipe work came out of the filtration room and dropped to around 2 meters with elbows everywhere.

After a few hours of searching for a leak location on the proven direction of the pipework, evidence was picked up behind the filtration room in an area of rough ground. When we exposed the area, this is when we found the Pipework dropped to 2 meters.

Let me elaborate, because I still can’t work out why the pipes were fitted in this way. The pipework came out of the filtration room, which was below ground level and ran vertically up the wall for about 4 meters in 5 inch pipework. It then elbowed out the top of the wall of the underground filtration plant room, then approximately another 4 meters horizontally out the back of the filtration room at a depth of 1 meter, then elbowed down another meter, then elbowed horizontally for about 40 meters in the direction of an area which, in somebody’s wisdom was having a tennis court built over!!  (Fingers crossed they don’t have a leak under there at some point!!)

It then elbowed to the centre of the pool with another 30 meter run. Why they felt that the pipework had to be buried at 2 meters, I have no idea. Why the run was in the direction it was, well that was even more baffling. And why anybody would plan a tennis court to be built over the top of these pipes, well I can only express as mind boggling.

Anyway not my job to judge, my job is to carry out the Leak Detection.

Let’s put it this way, the pipework installation depth changes drastically, and the 2 meter depth, not to mention the location, made this one of the most challenging Swimming Pool Leak Detections to date.

All I can say further is a thank you for the dedication and the professionalism of my team in such a difficult task. True Leak detection Engineers by all accounts. By the way, located the leak to just a couple of meters away from the area where the pipework dropped from 1 meter to 2 meters on the horizontal pipe run at 2m depth – the exact location!

Wishing everyone at the hotel good luck with their newly repaired pool!