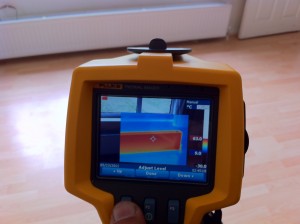 Thermal imaging cameras are used to detect areas or surfaces with extreme heat energy, a perfect tool in the toolbox of our Leak Detection engineers – allowing us to trace pipework and begin the leak detection and repair process.

They are electronic, handheld gadgets that are designed with visual displays to help identify heat energy – making them the perfect starting point in a non-invasive leak detection process.

They are mostly used by firefighters to detect areas with fire even through the darkest areas or areas with a lot of smoke. They are handheld, but users can also mount on helmets. Thermal imaging cameras mostly have water and heat resistant casing.

What Are The Uses Of Thermal Imaging Cameras?

How does a thermal imaging camera work?

These are pretty complicated devices but very efficient in their ability to detect infrared radiation from surfaces and objects. They work by detecting the IR of objects and surfaces where the thermal camera is directed at. The infrared radiation is then passed through an array of elements of detection. The detector elements then are able to create a very detailed temperature pattern known as a thermogram.

The thermogram is then converted to electric impulses. The impulses are then passed into a signal processing unit whereby the signal processing unit converts the information collected into data for display. This combination of these impulses then creates the images displayed on the screen. The images appear in different colours on the screen of the thermal imaging camera.

Do the thermal imaging camera only work at night?

No. Though the technology works perfectly at night, it can also be used in the daylight. In daylight, the thermal camera can be used to view in areas where there is no clear vision. For example, if you are viewing wildlife where the weather is foggy or very dusty, the camera will be able to outline warm-blooded animals clearly.

The thermal imaging camera works better at night since its thermal imaging sensors can outline warm objects more clearly with clear contrast. For instance, if you are to use this device in the day, you will find that humans and other warm-blooded animals will be more clear. 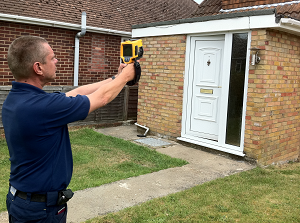 You may be surprised, but these devices do not work through glass. A full and more detailed explanation would need a more in-depth knowledge of some physics standpoint. The principle is pretty straightforward in that glass only allo

ws visible light through them but acts as a mirror for infrared wavelengths. You will find that the lenses of these devices are never built using glass. Instead, they are made from materials like zinc selenide or germanium.

This, however, is not a hard rule since some infrared frequencies may pass through a sheet of glass. Likewise, some types and also configurations of glass can allow some varying degrees of infrared to pass through them. In summary, you cannot expect reliable information if you are using a thermal imaging camera to read through glass.

Do the thermal imaging cameras work in water?

These devices do not work well in water. The reason why, is part of what has been outlined above about the technology working through the glass. Water tends to block a lot of infrared the same way an opaque barrier might block any visible light. In the same way that we as humans cannot see through paint is the same way; these devices cannot work through water. In short the wavelengths, it detects, are easily blocked by water.

Water also poses another limitation to these cameras in that the IR cameras when submerged will require even more energy to lower or even raise the temperature by one degree. This is in relation to the fact that water has a higher temperature compared to air. This can be summarized that it will be harder for these devices to differentiate objects when submerged, unlike when they are on the air.

We’re a leading leak detection company in the UK, we’re pioneers and experts in the use of thermal imagining to detect hidden leaks. Whether it’s indoors or outdoors, our thermal imaging cameras can pinpoint a hidden leak with clockwork precision. Talk to us now for a free no obligation quote, you won’t regret it. 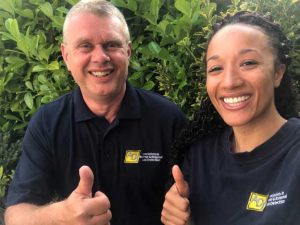